← back to
Redefining Darkness Records
Get fresh music recommendations delivered to your inbox every Friday.
We've updated our Terms of Use. You can review the changes here. 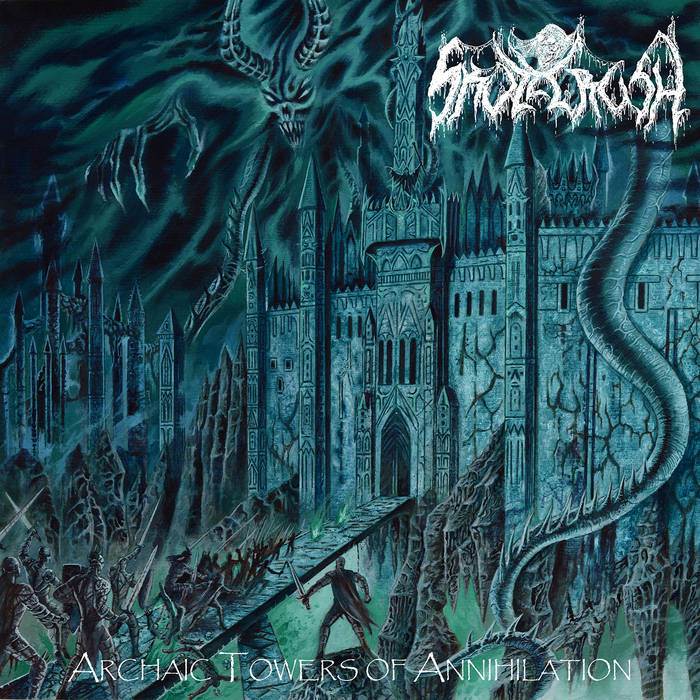 Onanjath Best distortion ever! Favorite track: Nightmares for the Blind.

Fraz I was a bit late in picking this up, high quality modern death metal. Nothing groundbreaking, but it is great fun. Favorite track: Overthrown.

Arrogant Bastard You get skullcrush’d, I get skullcrush’d, we all get skullcrush’d for Skullcrush!
100% works as advertised; this filthy slime-ridden death metal sledgehammer delivers the aural killing blow with the grimiest, most unsanitary sound of 2019. Skullcrush peddles a truly obscene and putrid album worthy of your time.
Come and join me, the muck is fine.

"This is grimy, sewer-dwelling slime in all the right ways, leaving trails of filth in your mind as the song blasts by like a speeding, on-fire train"
- Invisible Oranges
www.invisibleoranges.com/skullcrush-premiere/

"Whether you are a fan of the consciousness-expanding sounds of Blood Incantation, the clubbing blows of Malignant Altar or the raw sewage personified that is Fetid, there was surely something that struck your fancy. It is only right, then, that we send this year straight to hell with one last death metal salvo: Skullcrush’s debut album, Archaic Towers of Annihilation."
- Toilet Ov Hell
toiletovhell.com/premiere-skullcrush-will-guide-you-to-archaic-towers-of-annihilation/

"Archaic Towers of Annihilation is akin to the creatures that lived in the swamps of the Earth way back in its infancy. Thoughtless and beastly, its thoughts are only focused on one thing… consume."
- Games, Brrraaains, and a Headbanging Life
www.gbhbl.com/album-review-skullcrush-archaic-towers-of-annihilation-redefining-darkness-records-raw-skull-records/

"This is a record that understands the breadth of the death metal genre....While usually the group goes for raw death metal brutality at times they can turn around and unleash something a little more sick and twisted. Archaic Towers Of Annihilation is simply a fun listen that brings the stomp and is unafraid to go for the gut plain and simple. This is a band who nicely distill the magic of death metal and will twist your neck while doing it."
- Two Guys Metal Reviews
www.twoguysmetalreviews.com/2019/11/skullcrush-archaic-towers-of.html

"Five bands keep screaming at the back of my head when I listen to Skullcrush’s debut full length, Archaic Towers of Annihilation. Burial Invocation, Acephalix, Necrot, Succumb (USA) and Spectral Voice. If none of those are correct then I must be imagining things (which seems to have been the case lately). Coming in fresh from Phoenix Arizona the 4-piece demolition team has cracked open the shell of a rotten egg and has left it to sit within the underground for some time, yet only now the scent has met its peak. Though arriving late, it would be unfair to not mention the release as a worthy candidate among the best of 2019"
- Metal Bite
metalbite.com/album/35597/skullcrush-archaic-towers-of-annihilation

Emerging from their desert crypts, the Barbarian Horde known as Skullcrush are set to unleash their mighty primitive assault on their debut full length, ‘Archaic Towers of Annhilation’. Building off of their critically acclaimed ‘Visions of the Firestorm Eclipse’ EP, Redefining Darkness Records once again teaming up with European label Raw Skull Recordz, are proud to bring you one of the strongest and most primal Death Metal releases of 2019!

Bandcamp Daily  your guide to the world of Bandcamp